The U.S. Capitol pictured Thursday night in Washington, as Senate Republicans work toward passing a stripped-down version of health care, which would eliminate the individual mandate. 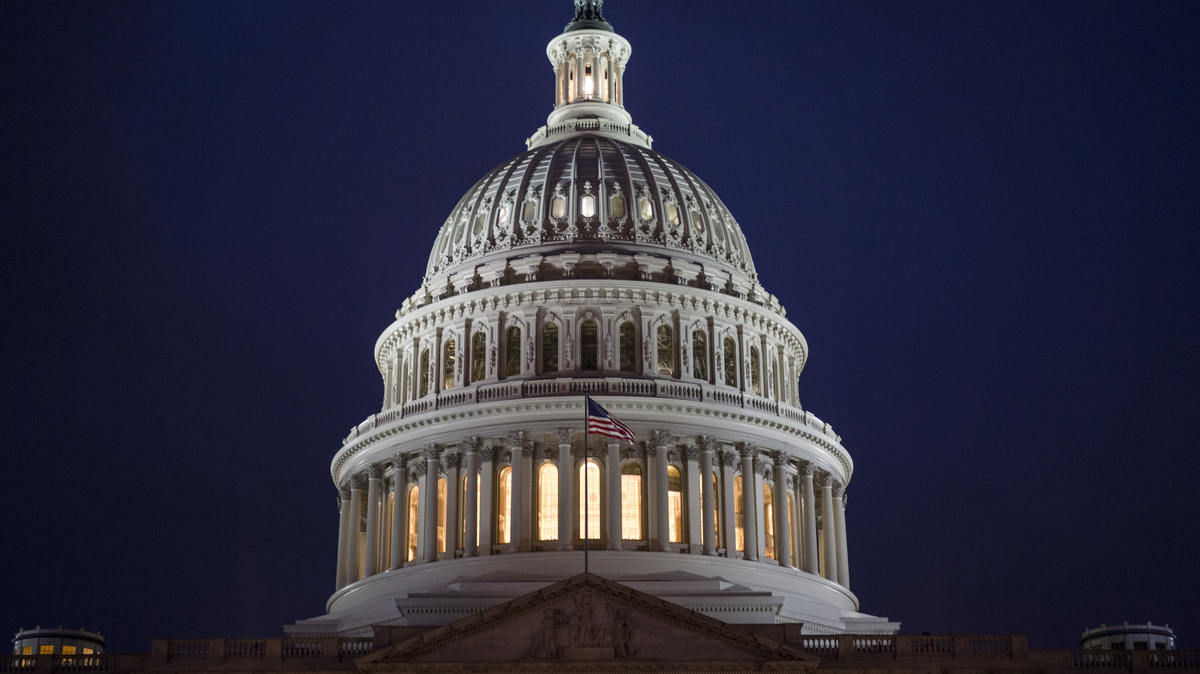 The U.S. Capitol pictured Thursday night in Washington, as Senate Republicans work toward passing a stripped-down version of health care, which would eliminate the individual mandate.

The Senate will vote at approximately midnight on the so-called “skinny repeal” bill.

It is expected to pass, but still not enough support from senators who have said so publicly to say for sure.

Shortly after the bill was released late Thursday, the president tweeted:

“Go Republican Senators, Go! Get there after waiting for 7 years. Give America great healthcare!”

Still, even Republican senators do not expect what was passed to become law. This is different than what the House passed, and the two bills need to be merged.

So what’s in it? According to the eight-page Senate version of the bill would:

-Repeal the individual mandate, which requires people to buy insurance or pay a fine.

-Increase flexibility for states to ask for, and HHS to grant, waivers from certain insurance regulations but keeps intact most of the current restrictions in place.

-Increase funding to community health centers, but blocks federal funds from going to Planned Parenthood for one year.

The non-partisan Congressional Budget Office estimates the Senate bill will save $178.8 billion over the next ten years, but it would result in 16 million fewer insured Americans than under current law projections. They also forecast a roughly 20% increase in premium costs through 2026, compared to under Obamacare.

Two Republican Sens., Susan Collins of Maine and Lisa Murkowski of Alaska, remain likely to vote “no,” which means every remaining Republican will have to vote “yes” to advance it.

This is how the motion to proceed passed earlier this week.

At least four Republican Sens., Lindsey Graham of South Carolina, John McCain of Arizona, Ron Johnson of Wisconsin and Bill Cassidy of Louisiana have told GOP leaders they are conditional “yes” votes, only if they are given absolute assurances that the “skinny repeal” will not become law.

More senators than that share the concern. They worry that the measure will go back to the House, where leaders will put it on the floor and pass it and send it to President Trump — who has said he will sign whatever lands on his desk.

The Senate is now in a position where they will only pass a bill if it is guaranteed it will not become law. This is similar to the House in May, where it was able to pass it’s version of the bill on the promise that the bill would get better when it came back from the Senate.

Democrats are withholding their amendments until they know what they are voting on, which means vote-a-rama could be shorter than usual if Democrats don’t offer any amendments. It is still expected to run several hours, but there is simply no way to offer any guidance on that right now.

The leader’s office says they do not need a fresh Congressional Budget Office score — that everything in the bill has already been scored, they are just putting new pieces together. They are confident for now that is not in violation of reconciliation rules.

Majority Whip John Cornyn told a small group of reporters earlier Thursday night that he expects House Speaker Paul Ryan will make some kind of announcement tonight that aims to soothe the concerns about going to conference.

Ryan met privately with a group of 5 senators including Graham and McCain to offer personal assurances “skinny repeal” would not get a vote.

Pence is heading to Capitol. He’ll need to be the tie-breaker.

The House has advised lawmakers not to make any fly-out plans until it’s clear what the Senate will do. It is possible that the House will vote on a motion to go to conference Friday before they leave town as that assurance.

House leaders have also passed this afternoon a “martial law” rule that would allow them to bring a bill to the floor in the coming days if necessary. They say that was a protective move to give themselves flexibility, but it’s spooked senators and others that the House would try to move the Senate bill for a quick vote.

If this all sounds unwieldy and confusing, well, it is.