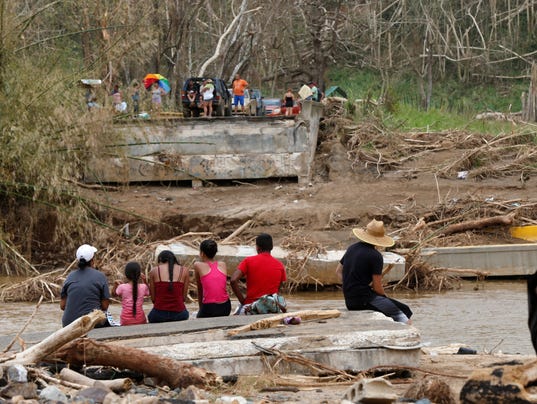 People sit on both sides of a destroyed bridge that crossed over the San Lorenzo de Morovis River, in the aftermath of Hurricane Maria, in Morovis, Puerto Rico, on Sept. 27, 2017.(Photo: Gerald Herbert, AP)

Puerto Rico’s health care system is being pushed to its limits in the aftermath of Hurricane Maria as hospitals and clinics grapple with crippling losses of power, fuel and medical supplies.

Residents and aid workers have described a battered island struggling with significant fuel and power shortages, making it difficult for health care facilities to meet the needs of the sick and elderly. Much of the island’s communications is also down, they say, compounding the crisis.

“If you’re someone who is in need of emergency medical care or urgent medical care, it’s a very difficult situation,” said Garrett Ingoglia, vice president of emergency response of AmeriCares, a relief organization that sent a team to Puerto Rico in recent days.

“Every day, in some clinic, we run out of diesel and have to stop treatments,” said Bob Loeper, head of the disaster response team at Fresenius Medical Care, whose 28 clinics normally provide dialysis to 4,000 of the 6,000 dialysis patients in the territory. “Or we run out of water and have to stop and wait for the water truck.”

Dialysis machines filter out toxins and remove excess water from the body in patients with kidney failure, said Lisandro Montalvo, the medical director for Fresenius Medical Care in Puerto Rico.

“If the patients are not dialyzed adequately, they will build up toxic substances and accumulate fluid that can end up in the lungs and lead to respiratory failure and other complications,” he said.

Calling from a dialysis center in San Juan on Friday morning, Loeper said every one of Fresenius’ clinics is running on a generator. They are desperate for a consistent supply of diesel and water to run their machines, he said.

Lack of gas is also an issue, especially for clinic staff, he added. The governor set a nightly curfew, so if staff run low on gas, they must wait hours in line during the day for a refill, which prevents them from coming to work and slows things down further.

“This is unprecedented,” said Montalvo.

On Thursday, the Trump administration temporarily waived shipping restrictions for Puerto Rico at the request of its governor and after criticism from members of Congress. The waiver lifts the Jones Act, which does not allow foreign vessels to pick up and deliver fuel between U.S. ports.

“We are doing as much as we can and as quickly as we can,” Assistant Secretary for Preparedness and Response Robert Kadlec told USA TODAY on Thursday.

He acknowledged: “But we do recognize that for people in need, it will never be fast enough.”

Medical centers in the region are slowly getting back on their feet. Fifty-nine of the island’s 69 hospitals were accepting new patients or maintaining patient care, though they were still running on generator power, Kadlec said during a press call Friday.

Power was recently restored to Centro Médico Hospital in San Juan, the main hospital on the island. The USNS Comfort, an 894-foot Navy hospital ship with 1,000 beds and 12 operating rooms, is expected to arrive in the area Tuesday.

Why are city centre banks thriving when other areas are losing...

Celebrating and protecting health care for the underserved