President Trump speaks as Senate Majority Leader Mitch McConnell, R-Ky., looks on during a meeting with House and Senate leadership at the White House back in June. 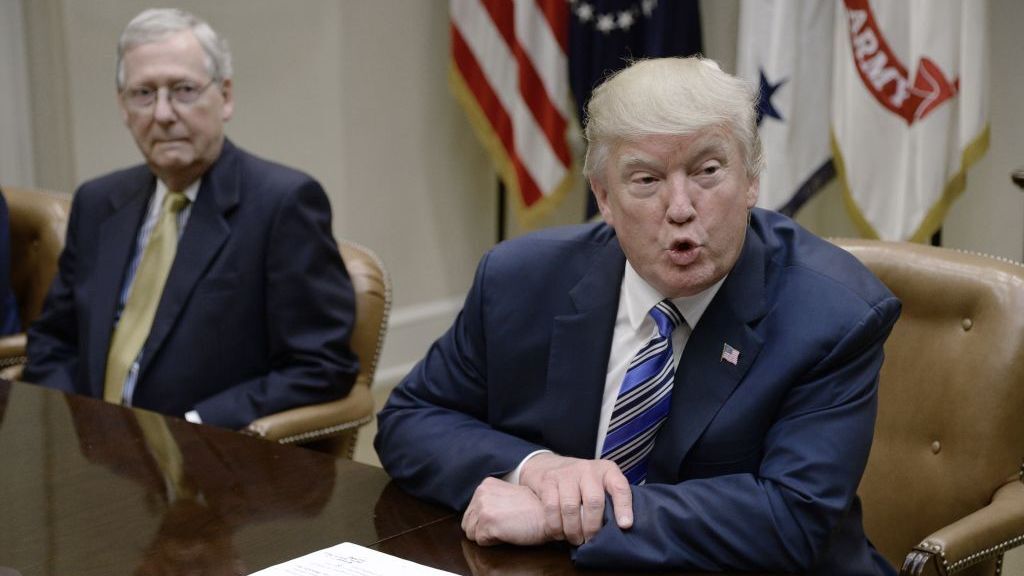 President Trump speaks as Senate Majority Leader Mitch McConnell, R-Ky., looks on during a meeting with House and Senate leadership at the White House back in June.

The top Republican in the Senate was the first to throw down the gauntlet this week, saying back home in Kentucky that it was Trump’s political inexperience that led to him setting “excessive expectations” over wanting to speedily repeal Obamacare.

“Part of the reason I think that the storyline is that we haven’t done much is because, in part, the president and others have set these early timelines about things need to be done by a certain point,” McConnell said on Monday, according to ABC News.

“Our new president, of course, has not been in this line of work before. And I think he had excessive expectations about how quickly things happen in the democratic process,” the Senate majority leader continued. “So part of the reason I think people feel we’re underperforming is because too many artificial deadlines — unrelated to the reality of the complexity of legislating — may not have been fully understood.”

Unsurprisingly, that explanation didn’t sit well with the commander in chief, and he took to Twitter on Wednesday to fire back, asking “After 7 years of Repeal & Replace, why not done?”

Senator Mitch McConnell said I had “excessive expectations,” but I don’t think so. After 7 years of hearing Repeal & Replace, why not done?

The escalating tension between the president and McConnell has the potential to jeopardize the rest of the Republican legislative agenda in the Senate when Congress returns to Washington, D.C., next month — a daunting list that includes a tax overhaul, raising the debt ceiling and more.

But it wasn’t just the White House that was, at least initially, pressing for an ambitious legislative agenda.

“The two biggest issues we’re moving forward with in the first half of the year obviously are repeal and replacing Obamacare and tax reform,” McConnell said back in January at the GOP congressional retreat.

The latest jab from the president toward the majority leader comes just after Trump gave McConnell a political win on Tuesday night when the president threw his support behind Sen. Luther Strange, R-Ala., ahead of a primary next week in a special election race.

Senator Luther Strange has done a great job representing the people of the Great State of Alabama. He has my complete and total endorsement!

Strange, who was appointed to fill now-Attorney General Jeff Sessions’ seat, has the backing of McConnell, the majority leader’s super PAC and the National Republican Senatorial Committee.

The endorsement was a blow to Rep. Mo Brooks, who’s fighting to earn a spot in a runoff as a result of Tuesday’s voting — with both Brooks and Strange likely to finish behind Roy Moore, a controversial former Alabama Supreme Court justice best known for refusing to remove a Ten Commandments memorial from a state judicial building. Brooks was critical of Trump last year during the presidential campaign, pointing to his “serial adultery”, and, more recently, the congressman slammed the president for his “public waterboarding” of Sessions on Twitter.

On Wednesday though, in the wake of Trump’s own escalating feud with McConnell, Brooks tried to seize an opening, urging the president to reconsider his endorsement since Brooks wants to oust McConnell from GOP leadership.

How to cope with health care costs in retirement