CAMBRIDGE — Organizers of a rally for affordable health care Saturday urged a crowd of about 100 people to get on their cellphones and personally thank three Republicans credited with blocking the law’s repeal.

On Friday, the Affordable Care Act survived a tight vote on its repeal Friday, thanks to three Republicans — Susan Collins of Maine, Lisa Murkowski of Alaska, and John McCain of Arizona — who joined with Democrats in opposing the move.

Organizers of the rally passed out fliers with the phone numbers of Republican senators Murkowski, McCain, and Collins, along with Massachusetts senators Elizabeth Warren and Ed Markey.

“I thanked them with all my heart,” said Gail Shluman, 70, of Cambridge. “It’s really inspiring to have these Republicans stand up and defy their party.”

Get Fast Forward in your inbox:

Forget yesterday’s news. Get what you need today in this early-morning email.

The Enough is Enough Healthcare Rally was organized by Cambridge Area Stronger Together, a group of local activists.

“We believe that we need to fight for civil rights, social justice, and human rights,” Victoria McGroary, an organizer with Cambridge Area Stronger Together, told the crowd. “And we believe health care is a human right.”

The Cambridge rally was part of a series of protests being coordinated across the country by Our Lives on the Line, which said on its website that rallies are being held Saturday in more than 40 states, including Massachusetts and the District of Columbia.

The rallies come a day after a Senate vote rejected a bid by Republican leaders to strike down parts of the Affordable Care Act, which became law in 2010.

Among those at Cambridge’s rally who offered personal stories was Adam Smith, 35, of Sherborn, whose wife, Elisa Sutherland, is battling multiple sclerosis.

The couple, now both 35, began facing medical issues while living in Portland, Ore., in 2011, when Sutherland was misdiagnosed by a doctor after reporting numbness in her leg. Neither had insurance, and Sutherland’s weeklong stay in the hospital cost about $40,000, said Smith. The financial hit was so severe that the couple later declared bankruptcy. 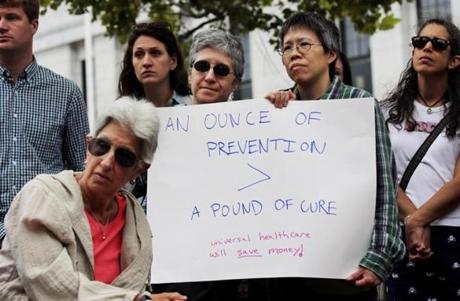 Kate Hermann-Wu and her spouse Ailsa held a sign while listening to a speaker during the rally.

In 2011, when they moved to the Boston area so Smith could attend a doctorate program at Brandeis University, Sutherland’s condition was correctly identified. By then, both had insurance.

“It was a huge emotional toll,” said Smith, who recently completed a doctorate program in politics at Brandeis.

The Cambridge rally had the support of some local leaders, including Cambridge Mayor Denise Simmons, who told the crowd that the rally was about “the cause of equity” and that services like health care and education should not be reserved for the wealthy.

“We the people, not just a few, are going to have a country that takes care of all of its citizens,” Simmons told the crowd.

Mickey Jay Thomas, a local disability activist, last month was part of a demonstration by disability advocates who traveled to Washington to speak out against a health care law repeal.

More than 40 protesters were arrested by police outside of the office of Republican Senator Mitch McConnell of Kentucky, the Senate majority leader, the Washington Post reported.

“Disabled advocates have been one of the many reasons why this has been successful. They would rather go to jail than die without Medicaid,” Thomas told the crowd.

Dr. Umbereen Nehal, the state director of Doctors for America, told the crowd she was motivated to join the health care fight because of to a 3-year-old she diagnosed with leukemia in the years before the Affordable Care Act. She thought the hardest part would be telling the child’s father about the cancer.

“The first question that father asked me was, ‘How will I afford this?’ said Nehal. “And that absolutely broke my heart.”

Nehal said the country should work to ensure every American has access to medical care.

“We should have a sensible system that plans to prevent crisis and allows people to stay healthy. And that’s what we have to fight for,” she said.

John Hilliard can be reached at john.hilliard@globe.com.

Aramisauto and TNS Sofres publish a study on the report of...