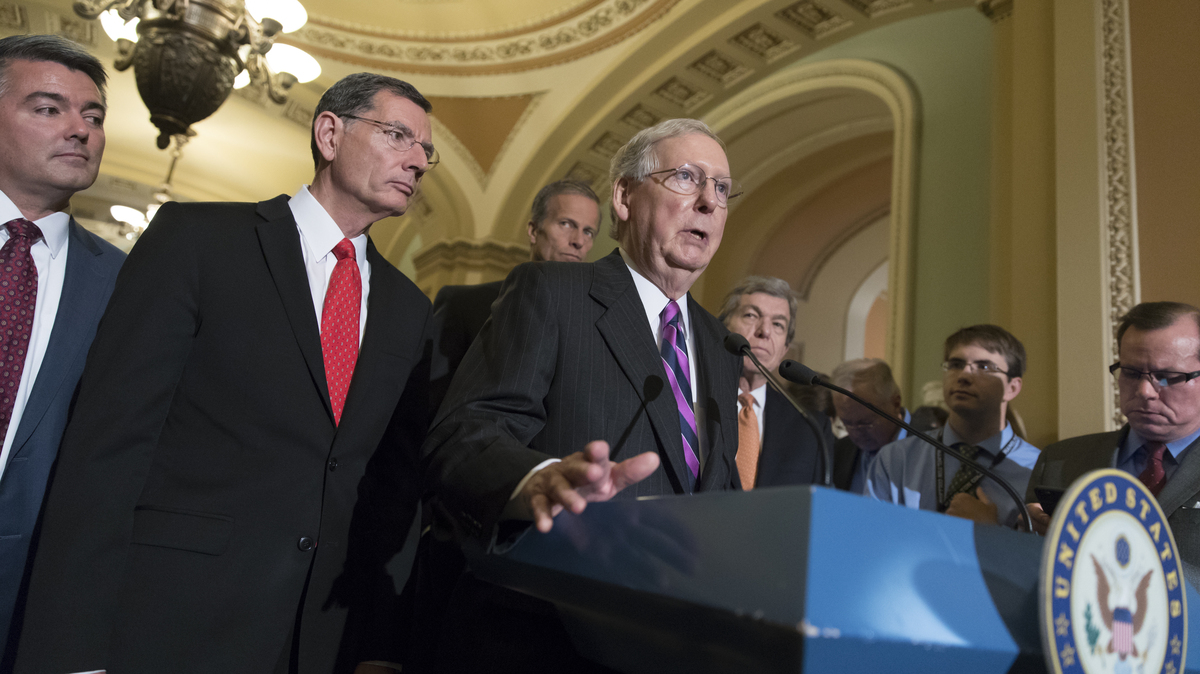 The White House says the fight over health care is not over, but on Capitol Hill, Republicans are ready to move on.

“The president isn’t giving up on health care and neither should the Senate,” Office of Management and Budget Director Mick Mulvaney declared on CNN on Wednesday.

“Comprehensive tax reform represents the single most important action we can take now to grow the economy and help middle-class families get ahead,” McConnell said. He added that the Republican Party has a “once-in-a-generation opportunity” to redesign the nation’s tax laws.

McConnell has not publicly declared the Republican effort to “repeal and replace” the Affordable Care Act over, but the mood on Capitol Hill has decidedly shifted to the next legislative battle: cutting taxes.

The same day the health care bill collapsed last week, the “Big Six” negotiators announced a very broad outline of what Republicans hope to achieve with a tax overhaul.

The group has been meeting privately for months to sketch out a game plan on tax legislation. Those meetings also ultimately scuttled Ryan’s original hopes of including a controversial new tax on imports that he had hoped would raise new revenue to pay for cuts elsewhere.

Republicans are hopeful that a tax bill will be an easier lift than health care, and lawmakers say the pressure to deliver tax legislation has intensified after failing on long-promised health care legislation.

While the party never really coalesced around an alternative to the Affordable Care Act, every Republican in Congress supports tax cuts.

Some of the broad proposals include reducing the number of personal income tax brackets, and lowering the corporate rate as low as 15 percent — which the president has called for in the past.

The tough questions about what those rates will be, if or how tax cuts will be paid for and what process Republicans will use to get the legislation through Congress remain unanswered.

The last major federal tax overhaul of this scale was in 1986, under President Reagan, who signed a bipartisan bill that has become a tale of Washington folklore featuring, for example, a final deal worked out over two pitchers of beer at a Capitol Hill pub.

But, the prospect of a bipartisan bill this time fizzled quickly earlier this week.

Forty-five Senate Democrats sent a letter to McConnell outlining the conditions that needed to be met for them to work with Republicans on a tax bill: no tax cuts for the wealthiest Americans and no cuts to entitlement programs to pay for tax cuts.

McConnell quickly declared that offer a non-starter, and indicated Republicans will use the same budget reconciliation process they deployed on health care to skirt the Senate filibuster and try to pass a bill with 51 votes.

Democrats are skeptical Republicans can pull that off with a tax overhaul.

“The question will be: Are they going to repeat the mistake of health care where they said they want to try to do tax reform just with Republicans?” said Sen. Mark Warner, D-Va., “If they use reconciliation they’re not going to have a very easy path. If they think health care is hard, they have not seen anything in terms of how you deal with the complexity of tax reform.”

The White House is demanding an aggressive schedule. Mnuchin this week said Trump would like to sign a bill by Thanksgiving.

Congressional Republicans are using the August recess to drum up support for their ideas, including an event at the Reagan Ranch in California on Aug. 16.

The Senate wrapped up its pre-recess business Thursday. So both chambers are on August recess until after Labor Day.

Already, staff is working on draft legislation. House and Senate lawmakers say they hope to release those drafts in September and start having open committee hearings.

Under this timeline, the House would vote in October, and the Senate would follow suit in November and send the bill to the president.

“This won’t be an easy process, but the people we represent are depending on us for help. Now is the time to deliver tax reform, and I look forward to working with my colleagues to accomplish it,” McConnell said.

Whether or not Republicans can pass a tax bill — and whether or not their voters will forgive them for not passing a health care bill — are two questions that will hang over the GOP majority for the rest of 2017.

Health care experts: Forget the spray, get the shot to fight...